If you're like me, you're not a guru at real time strategy games.

I am the kind of person who needs a lot of practice in order to even resemble some level of competency in a game as massive as Ashes. With so much going on at once, it can be hard to understand where my weaknesses are - as well as my strengths - and what I can do to compensate for or take advantage of them.
Fortunately for me (and for anyone else new to RTS), the new Escalation expansion makes it easier to learn and practice thanks to the newly added map options and already existing AI options, which I'd like to highlight here. There is quite a lot to talk about, so part one will focus on the AI.
One of the advantages I don't have as a fairly new RTS player is being able to identify my enemy's strategies and build in order to defeat them. Admittedly, my first several playthroughs of Ashes were nothing more than clicking on a few of the same familiar units, hitting "repeat queue" and going about my merry way as I tried to collect enough resources to avoid crashing my entire economy.
Spoiler Alert: that didn't work for very long.

At any rate, the AI options for Escalation allow for a level of very specific practice. Instead of just the default AI and various difficulty levels, I can select "personalities" for my opponents that change the way they play against me.
While I'm not quite there yet, this has been helping me to gain a better understanding of how to counter certain types of tactics. By being able to focus on practicing against a certain "type" of player, I am also getting better at identifying what types of things signal my opponent’s strategic intent.
Let's take a look at the options:
Skirmisher
An AI that loves cheap units, lasers, and getting into battle.
The Skirmisher AI plays closest to what my personal strategy usually is - build lots of "little" units quickly, group them up, and conquer regions systematically. The problem is, I tend to bunch them all together and send them out in a single conglomerate mass, which usually leaves me wide open to attack when I’ve got nothing at my base save for a few defense turrets and a couple of overworked nanobots.
Playing against a Skirmisher AI has shown me how much stronger I can be with the smaller and cheaper units by building extra factories, splitting up into multiple, well-rounded armies, and scouting ahead before over committing.
Defender
An AI that believes a good offense starts with a good defense.
I have the hardest time with turtlers. They are much better at building up their bases than I am and they are so quick with their defensive systems that by the time I get an army of my smaller units there, they shred me to pieces when I finally arrive. I used to love turtles, and I suppose I still do in the cute little animal type context, but certainly not in Ashes.
To combat this, I have gotten better at managing my resources so that I can build bigger guns more quickly. While they're far from indestructible, a dreadnought hitting the battlefield is enough to rattle even the most bunkered down turtle-types. I have also found a particular affinity for taking to some air combat - sometimes, I get lucky, and my opponent has neglected to build up their anti-air defenses.

Bomber
An AI that prefers to use artillery bombardment.
I still have some trouble with this one. While I am getting better at building heavy-hitters, I am still learning how best to defend against them. Sometimes, lots of small and cheap units early on can stave off this kind of problem for me, but that’s not always reliable.

I am learning to remember to use my orbitals and to build up as many turrets around my base and my newly conquered regions as I can. Oftentimes, I forget to leave anything to protect regions that are more valuable (I am always struggling to have enough radioactives to build the things that I want), so this has taught me to "leave my mark" as I divide and conquer. 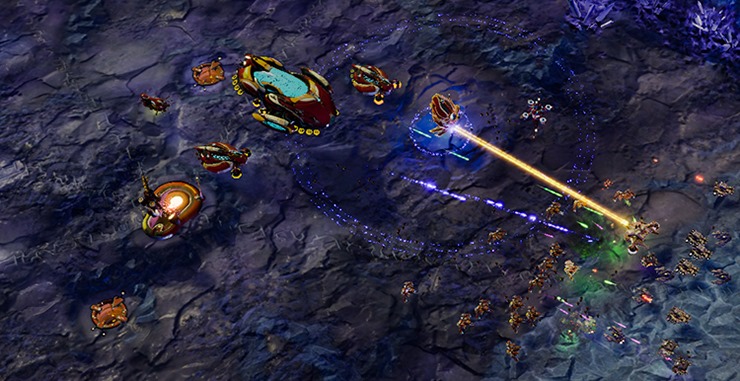 Cruiser
An AI that targets enemy Nexuses early and often.
This hurts, no way around it. In fact, I remember my first game against a one Adam Biessener where I thought I was doing just dandy, only to discover that I had absolutely no defense against his "hit 'em hard and hit 'em early" strategy. Once I'd recovered from my embarrassment, I went into future games knowing full well that building some early game anti-air was imperative.
The Crusher type is really aggressive, and I haven't had too much practice against it yet. One of my major handicaps is my speed. While speed isn't the primary skill necessary for playing Ashes well, a level of familiarity with what units you want to build, what each unit does, and how best to combat the strategy of your opponent is critical for being able to make quick decisions and commit to your own plans. Playing more frequently against an aggressive AI like this has made me better at avoiding critical time-losing mistakes.
Drone Hiver
An AI that favors using drones in battle.
To be honest, until I started playing against the AI on this setting, I hadn't had too many encounters with people who used a lot of drones, including myself. I have, however, played enough Starcraft over the years to know what it's like to be "zerged" to death - let me tell you, those little alien buggers ain't got nothing on these drones!
I sometimes have a hard time focusing when a lot of things are going on at once, which is why RTS games can be difficult for me to keep pace in. When someone attacks you with drone swarms, there is a lot happening at once. Practicing against this AI mode has helped me learn to see the important things when under massive attacks (i.e.: the source of the drones) and stay calm under fire so that I am able to win more often.

In the next article, we'll cover the new map options in Escalation and how to use those to either help yourself practice, play a more relaxing game, or play something that will really challenge you.