Strategy and mayhem are the core of what makes a tower defense fun to play. Tower defense games need to pose meaningful decisions to the player, but while also containing tension and frenzy. Siege of Centauri went through different iterations internally as we tried to find the perfect mix of strategy and mayhem. Strategy and mayhem aren't inherently at odds with each other, but inevitably will be at times. Each tower defense game has different leanings, but there's always a balance to strike and navigating that dichotomy has been a design challenge. Today I'll be sharing some of the examples where this dichotomy has come up and how we've navigated around it.

Ignoring balance and difficulty for a moment, how much should towers cost? It may seem like a basic question, but it matters a lot! If towers are too cheap, then placing them can feel inconsequential and a repetitive chore. If towers are expensive, you'll naturally only have a few so as each is more of a commitment, making each one more meaningful. However, overly high tower costs mean you can spend too much time saving up and waiting rather than placing towers. You can feel more like an observer than a player, and overly expensive towers can make the rock/paper/scissors counter system too punishing. Lower tower prices also mean you have more action on the screen, which creates cool visuals! Sitting back and watching towers blow stuff up should be fun. 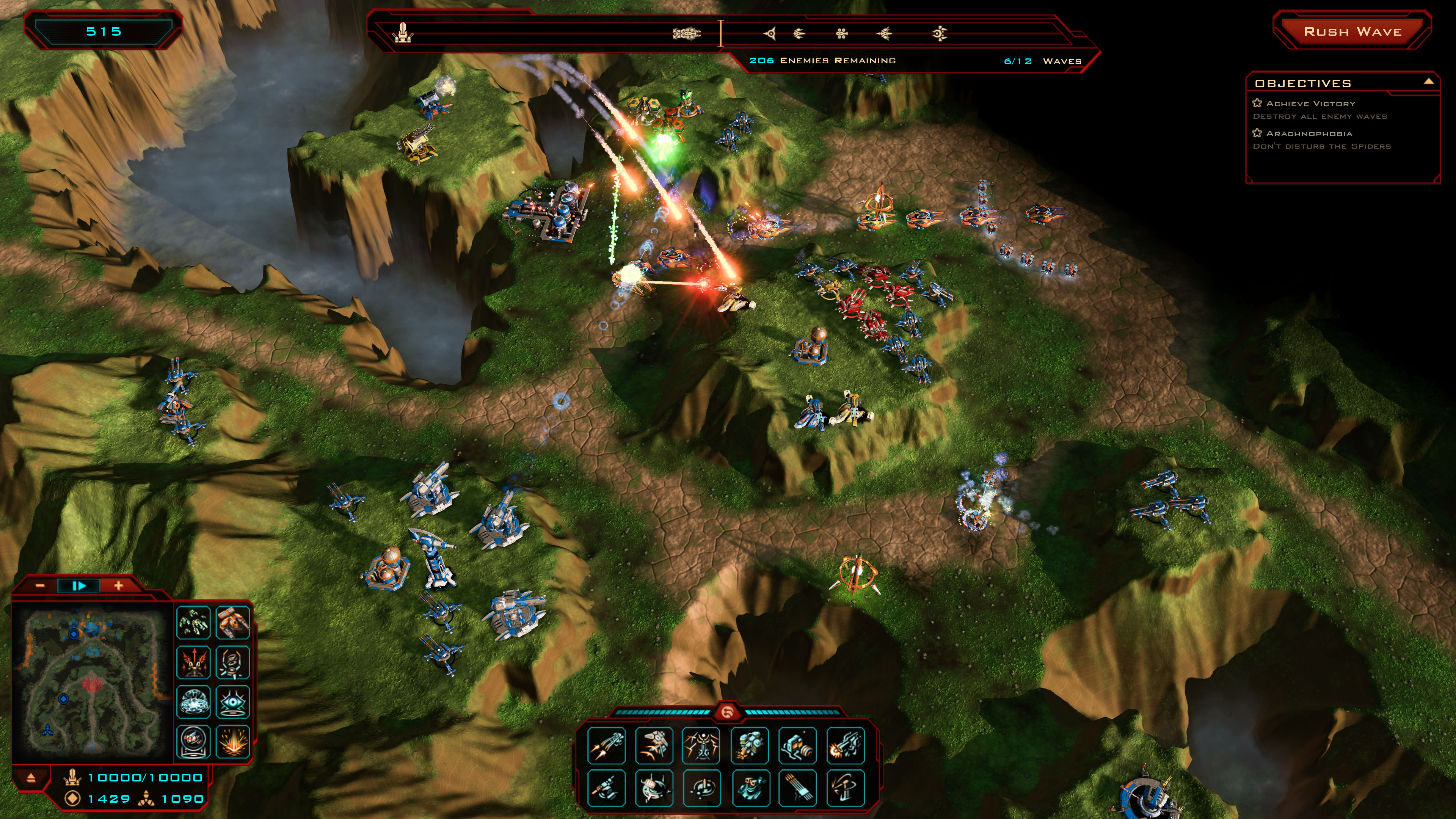 The limitation of build space also matters. Less available build space and large towers mean you have to be weighing up placement more carefully which adds to the tactical depth, especially with utility towers. However, limit build space too much, and it can feel too restrictive and annoying. You don't want to make towers too small, but also not too big. You need to strike a balance which is the recurring theme here.

Many tower defense games allow the player to pause and take their time to view the battlefield, planning defenses and calling down turrets at their own pace. Not having time constraints maximizes the strategic emphasis of the game because all your decisions can be deliberate and fully calculated. However, having unlimited time removes the tension since you're not forced to respond under pressure, so for many that's boring. How do we cater to both the players who want the strategic emphasis and those who prefer a frantic experience? 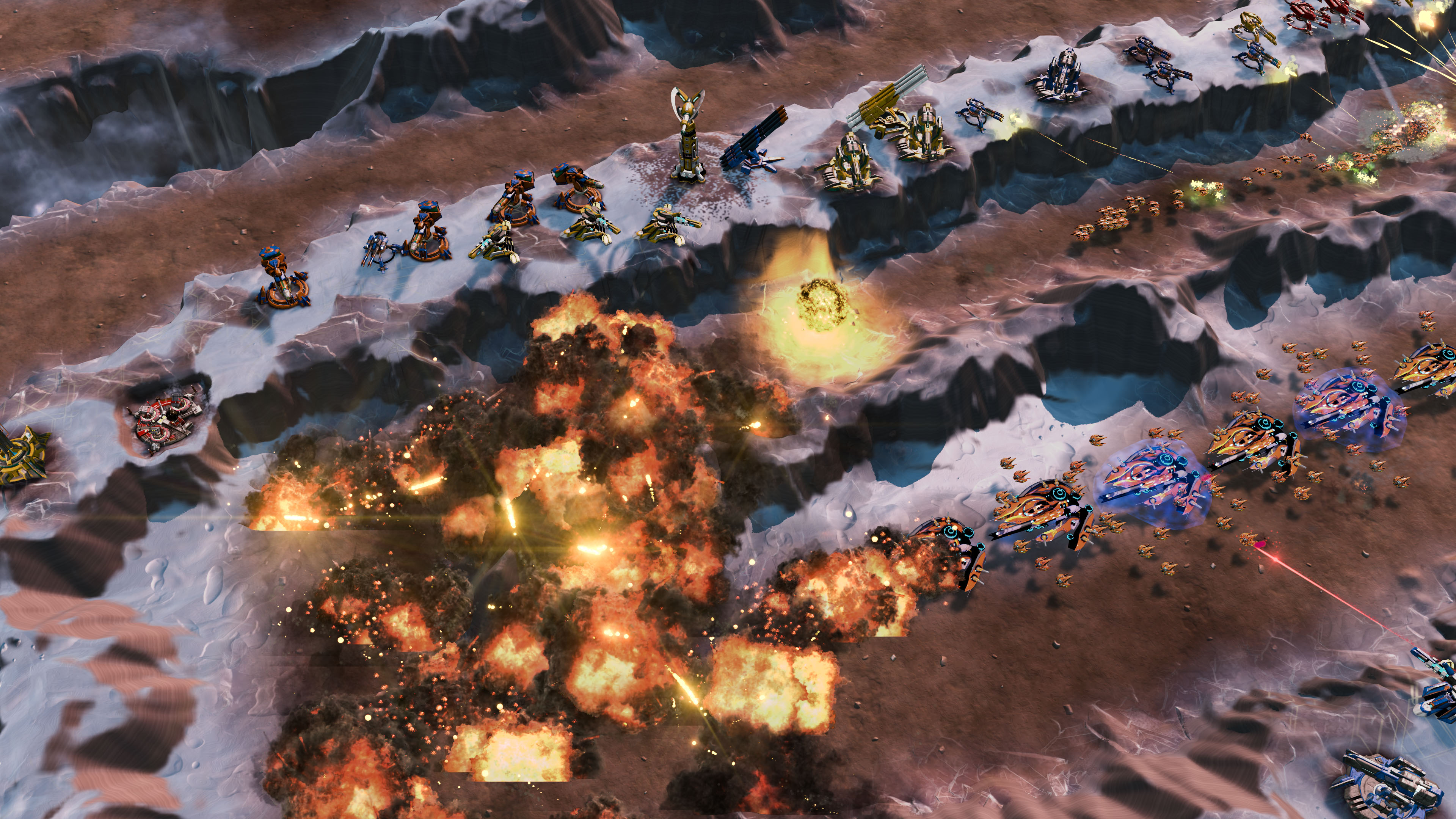 In Siege of Centuari, we have Chrono Shift as a pseudo-pause similar to bullet time. While Chrono Shift is activated, the game is slowed down to 5% speed. The recharge rate of Chronoshift scales with difficulty level, starting at unlimited on Training but then not recharging on Nightmare. It's an excellent means of catering to the gentle pace of strategic consideration, but also maintaining mayhem because its use is limited. Besides, slomo looks cool! Chrono Shift being a part of the game feels more fair and gratifying than just pressing pause and having everything magically stop, it's contrived and almost feels like cheating.

It's the job of a game designer to incentivize the best gameplay as players will choose efficiency over fun. We think the peak experience in Siege of Centauri is challenging mayhem, so how do we incentivize that? Rushing waves brings on more enemies but also provides a significant Metal and score bonus. Siege of Centauri also has Outposts that serve no gameplay purpose other than granting score if defended. We also have 8 difficulty levels which encourage the player to rise to the next difficulty instead of being comfortable and scared of a large spike going from easy to medium. Self-imposed difficulty is much less frustrating to lose to and we encourage the player to make the game harder and faster. Since tower defense games have short play lengths with high replay value, score is more of a motivation than in other genres. 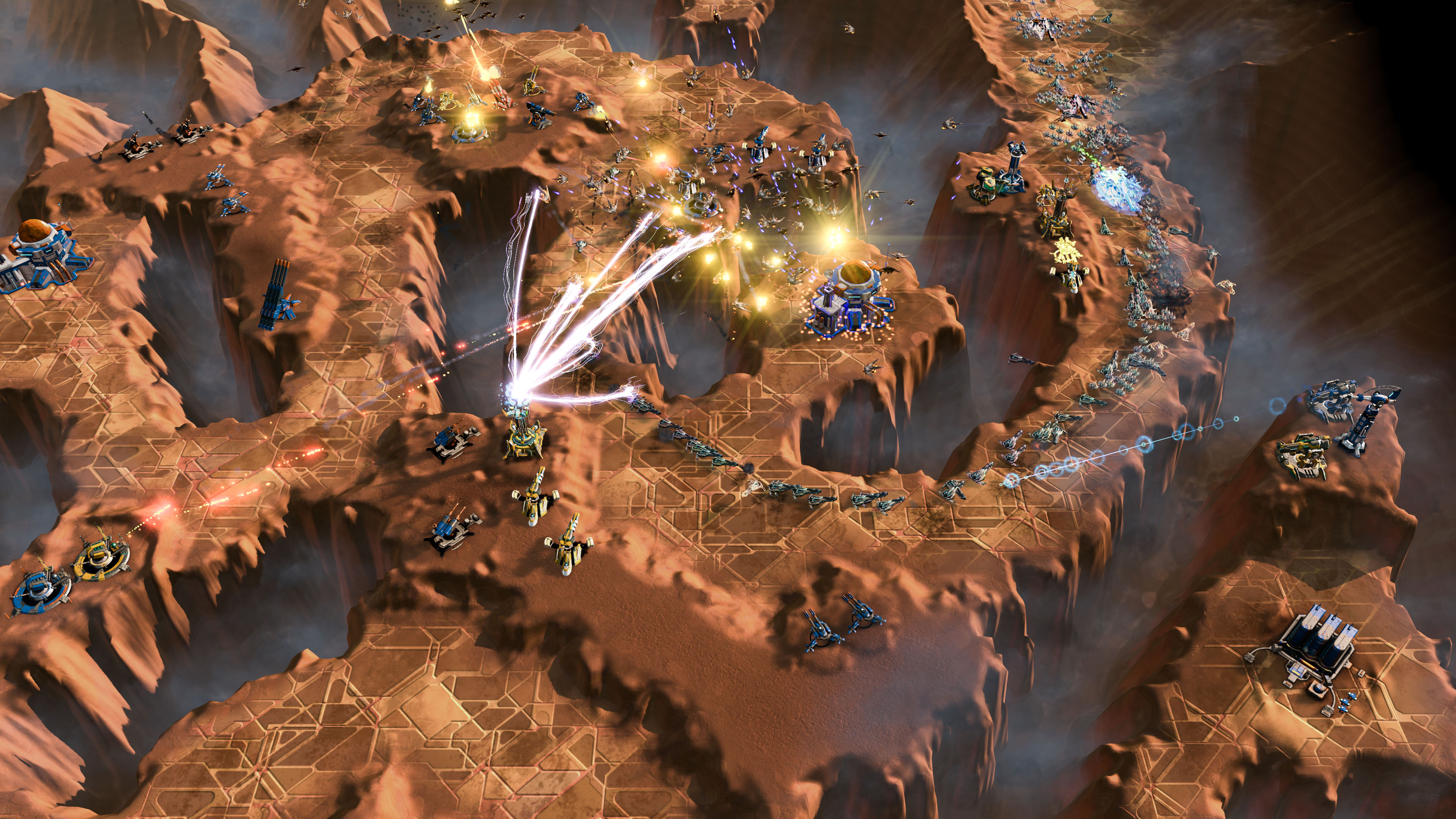 Originally our Orbital Abilities were free and were only limited by cooldowns. This felt shallow as there wasn't much to consider; strategy is all about how to utilize limited resources, with more opportunity cost comes additional decisions. We briefly experimented with Orbitals costing Metal, the same resource as towers, which maximized opportunity cost. The problem with Orbitals costing Metal is that it discouraged the player from using them as the abilities are temporary while Towers are permanent, framing the use of Orbitals in a punishing way. Using Orbital Abilities is fun and want to maximize the player's interaction with them, but while keeping their use meaningful. Constantly thinking about whether or not to deploy one of the many abilities induces mayhem by giving the player more to think about in each moment. Orbital Abilities now use a second resource called Energy, which encourages the player to frequently deploy them as there's no other use for Energy. Players can also upgrade Fission Reactors to increase their Energy income at the cost of Metal to focus more on Orbital usage.

Strategic decisions should be deliberate and calculated, not haphazard and involving luck. For that to be the case, a tower defense needs clarity of information presented to the player. Players also need notice about creep movements because of the build and upgrade time of towers. The wave panel in Siege of Centauri indicates the incoming creep types and direction, allowing players to spend their resources without getting caught off guard by something. The importance of giving a warning about incoming waves depends on the severity of the counter system. If there's no rock/paper/scissors counter system (Bloons TD), then it doesn't matter if there's no early warning. On the other hand, withholding information about incoming enemy types may generate more tension and force the player to react more under pressure. If maximizing mayhem in a tower defense is the intention, such as in Revenge of the Titans, then having a wave panel is not beneficial. 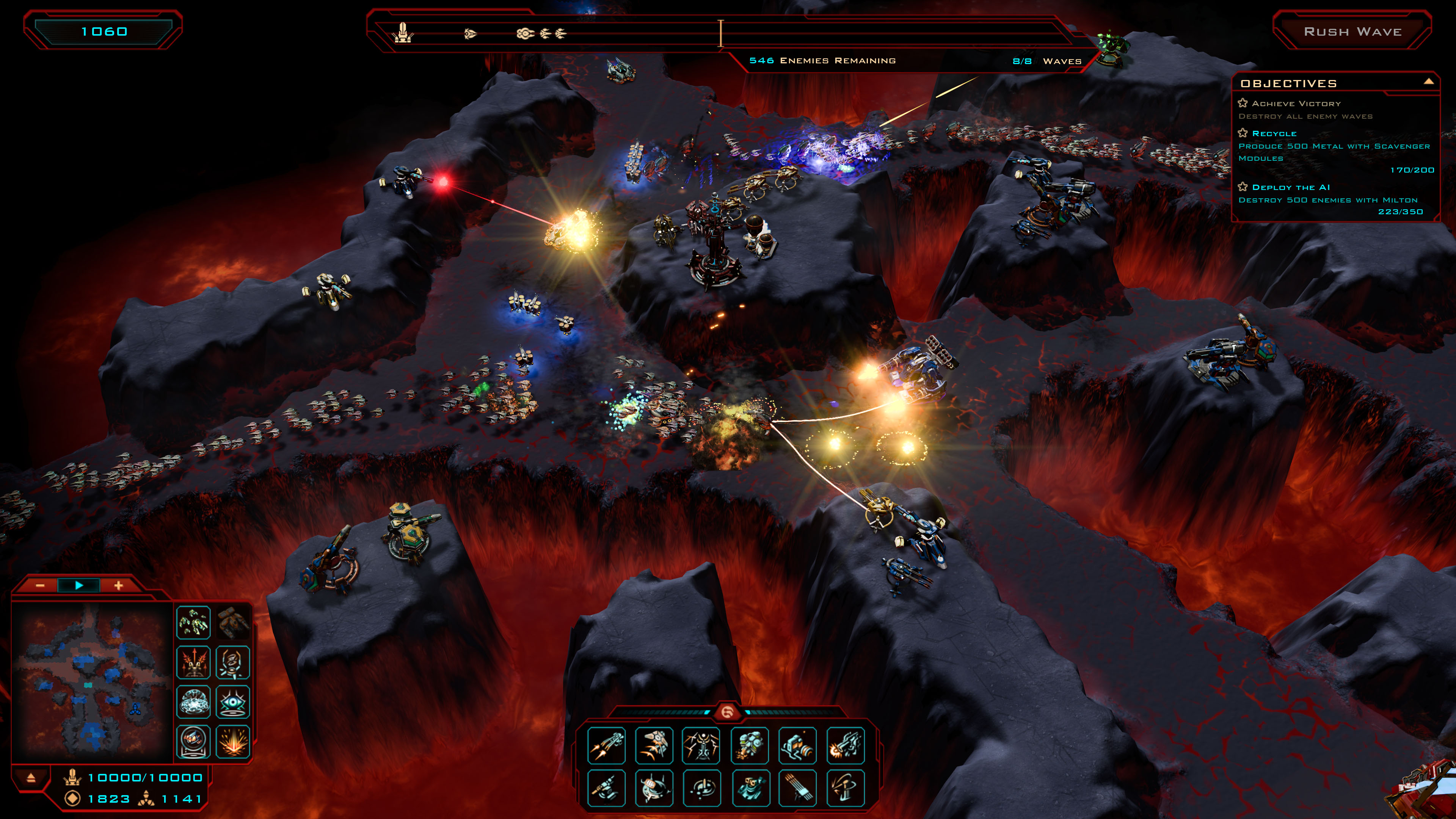 Sometimes, when we're lucky, the interests of strategy and mayhem perfectly align! In Siege of Centauri, there's a 5 second delay before new towers activate and an even longer delay when upgrading. This delay forces you to plan defenses in advance and creates a trade-off for deploying more firepower on the front lines or in the back where it has time to deploy. The impact of build delay adds strategic depth because it's an important decision to weigh up, but it's also mayhem-inducing because you have to make the decision on the fly.

There are ways to create mayhem without having any gameplay impact. As a carry-over from Escalation, spotting a Dreadnought in Siege of Centauri plays a voice over of "enemy dreadnought detected." That voice over is simple but adds a nice tension of "oh crap" knowing that something big and tough is coming. We also display on the wave panel how many enemies are on the map at any given time. Knowing there are over 3000 enemies moving towards the Colony keeps you on your toes! 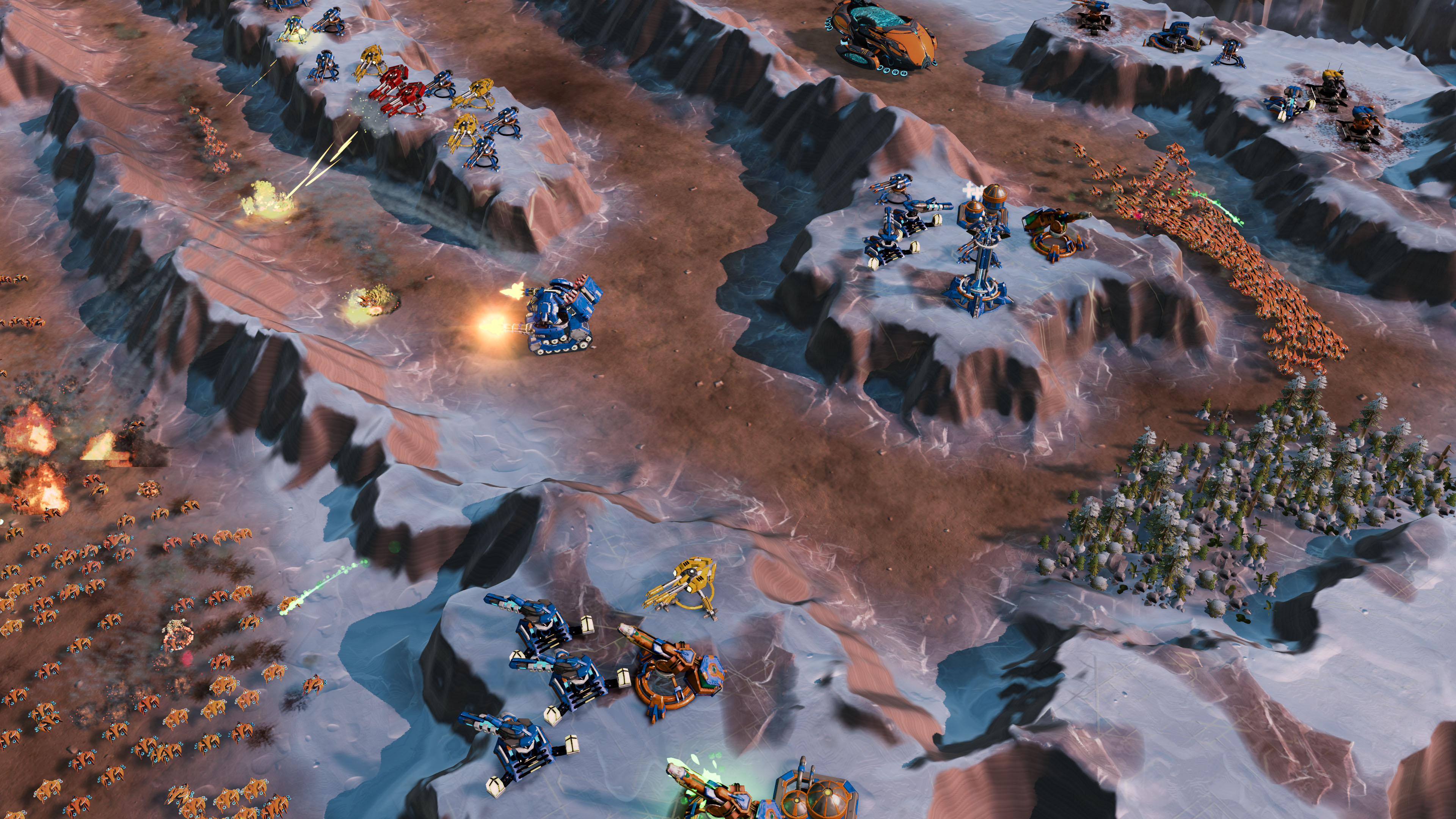 Strategy and mayhem are the twin pillars of tower defense design. A tower defense game needs to decide on its focus as strategy and mayhem are often conflicting and navigating that dichotomy can be a challenge. Be aware of design intentions and intended peak experiences as just wanting to make a game "fun" is too vague. Designers should try to find ways to develop those aspects without compromising each other such as the Chronoshift mechanic. With Siege of Centauri, I think we've done a great job creating a tower defense game that's rich in strategic depth during its frenetic gameplay.

Let us know what you think!
Cheers,
-Callum.