A new expansion is announced for Offworld Trading Company, Stardock goes to a streamer meetup, and highlights from content creators are all part of this edition of the community newsletter.

Travel to the smallest of Jupiter's Galilean moons and carve out a name for yourself against your competition! Head to the frozen moon of Europa, where numerous cracks on the moon's surface and multiple methane geysers will make building and sustaining structures a whole new challenge.

Made of silicate rock and possessing a water-ice crust, Europa's atmosphere is thin but comprised mostly of oxygen, which makes it the next natural step for space-bound entrepreneurs.

Read the full announcement and add to your wishlist on Steam today!

This coming October 27th, at 7 PM GMT there is a Halloween event for Offworld Trading Company hosted by Trattpingvin on the OTC community discord server.

Participants will be playing in teams and play unusual game modes (2v2v2v2, 8 FFA) on crazy maps.

This is an event and not a tournament, so skill level is not a factor. Silliness and players enjoying themselves is the goal, with both new and experienced Martians welcome.

In addition, if you are a map maker for Offworld Trading Company you can submit your maps for the event. Be sure to contact Trattpingvin before the day.

Additional details will be available once maps have been confirmed.

To sign up head on over to the community discord server and sign up in the #halloween-event channel.

We had the opportunity to meet some of the local streamers in the Michigan area at the Detroit Meetup on the October 12th.

Kristy and Callum really enjoyed meeting everyone while they raffled off a bunch of awesome Stardock swag, including a coveted ship model from Sins of a Solar Empire: Rebellion. The event had a lot of energy, and the venue was certainly cool - a huge open bar spanned the entirety of the room which was also littered with several nooks and crannies with gaming consoles and TVs. A nod to the LAN bars of yore, GameTime also had several PC stations powered by Alienware with comfortable Respawn chairs strewn throughout the establishment, too! If you're local to the Auburn Hills area of Michigan, be sure to go and visit with some friends.

Apparently (this was totally news to Kristy), a local professional gaming group called The Renegades are housed out of GameTime. You can sometimes catch them practicing Fortnite or Super Smash Brothers: Ultimate (among other things!) during certain hours, which are usually noted on GameTime's calendar. The bar also hosts tournaments regularly, so if you have an edge of competition to you, it's worth dropping in to share your fighting spirit.

The organizers for the Michigan Streamers Meetup threw an awesome event, and Stardock was thrilled to be a part of it! We're really looking forward to the next one.

"I didn't think there'd be so many streamers in the area, I wasn't expecting over a hundred people to show up! Turnout was great, most people were excited to find out there was a local game developer in Michigan." - Callum McCole 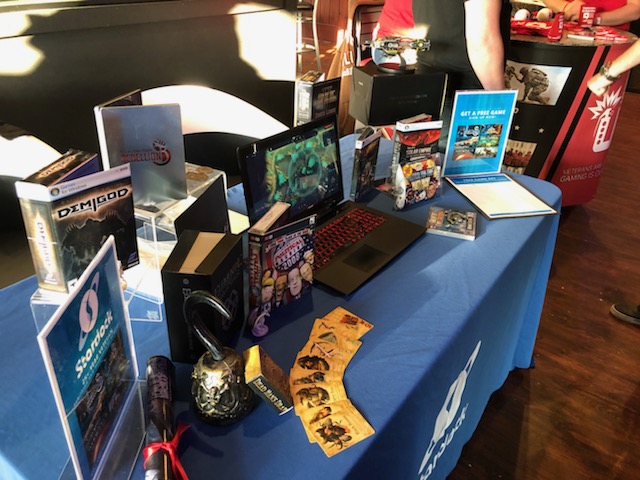 Sometimes you need to make a point not only with firepower, but style too. Today we are happy to showcase another creation born of love of all things space and science-fiction with the famous Space Battleship Yamato recreated in the ship designer of Star Control: Origins.

This creation of dsautner on the Steam Workshop, is expensive, sleek and whilst not the fastest hits hard. I was surprised to discover instead of doing for a beam weapon dsautner elected to use the Trandal weapon for a close range but high damage attack.

Ashes of the Singularity: Escalation - 1v1 THE MASSIVE WAR