Update 1.05 added Survival Mode to Multiplayer. In Survival mode, all the AIs are locked in permanent war with the human players and allied with each other. They also receive bonuses that increase over time. The AI will win, the question is, how long will you last? Or in a MP game, which human will last the longest?

But you don't need other humans to play MP in GC4, so I setup a Survival mode game to play all by myself. 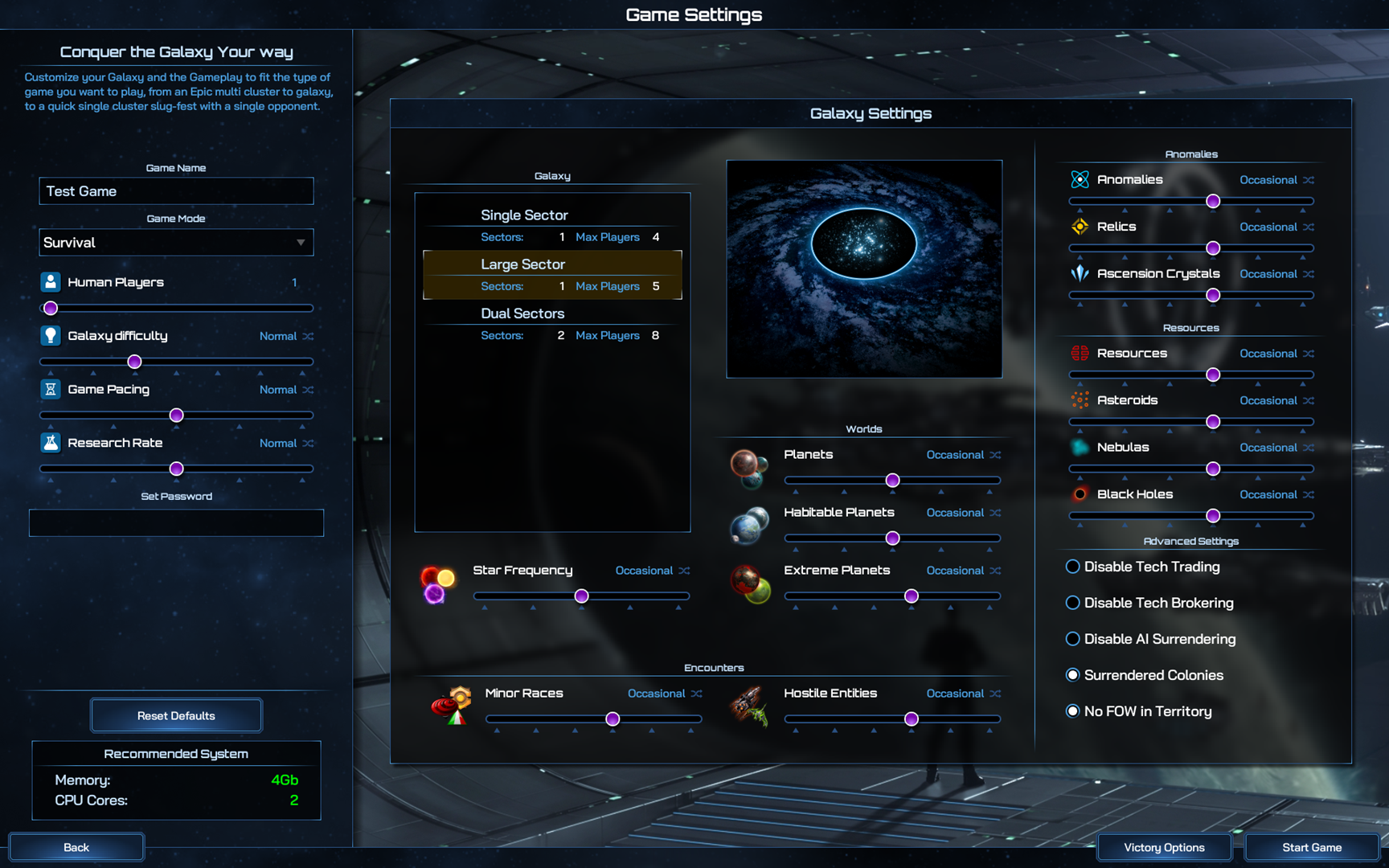 My settings are all fairly typical, one large sector, normal difficulty. I should probably have disabled Tech Trading. Since I am locked at war with the AI, I will never be able to trade techs with them, but they are free to trade with each other. 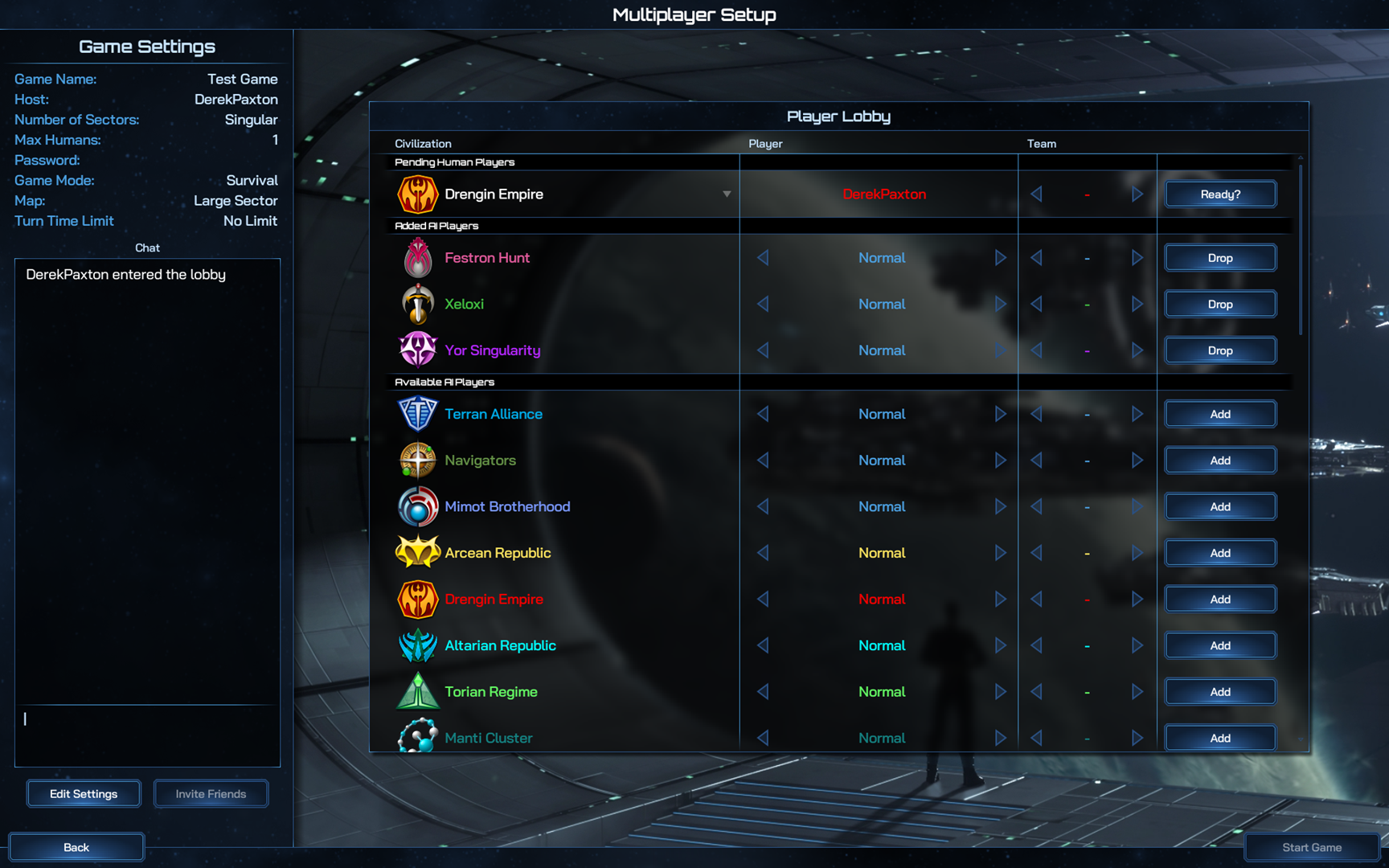 I decide to play as the Drengin. Their strong military command ships and a volcanic homeworld with lots of manufacturing power should help me fend off early rushes. They also have a few policies which may not be enjoyed by my citizens, but these are hard times we are living in and only the strong will survive.

I pick out a batch of my favorite bad guys to go up against. It feels right to have the Yor, Festron, and Xeloxi coming after me early. I leave the Mimot off the list, I don't mind losing, but it's embarrassing when it's to a gremlin. 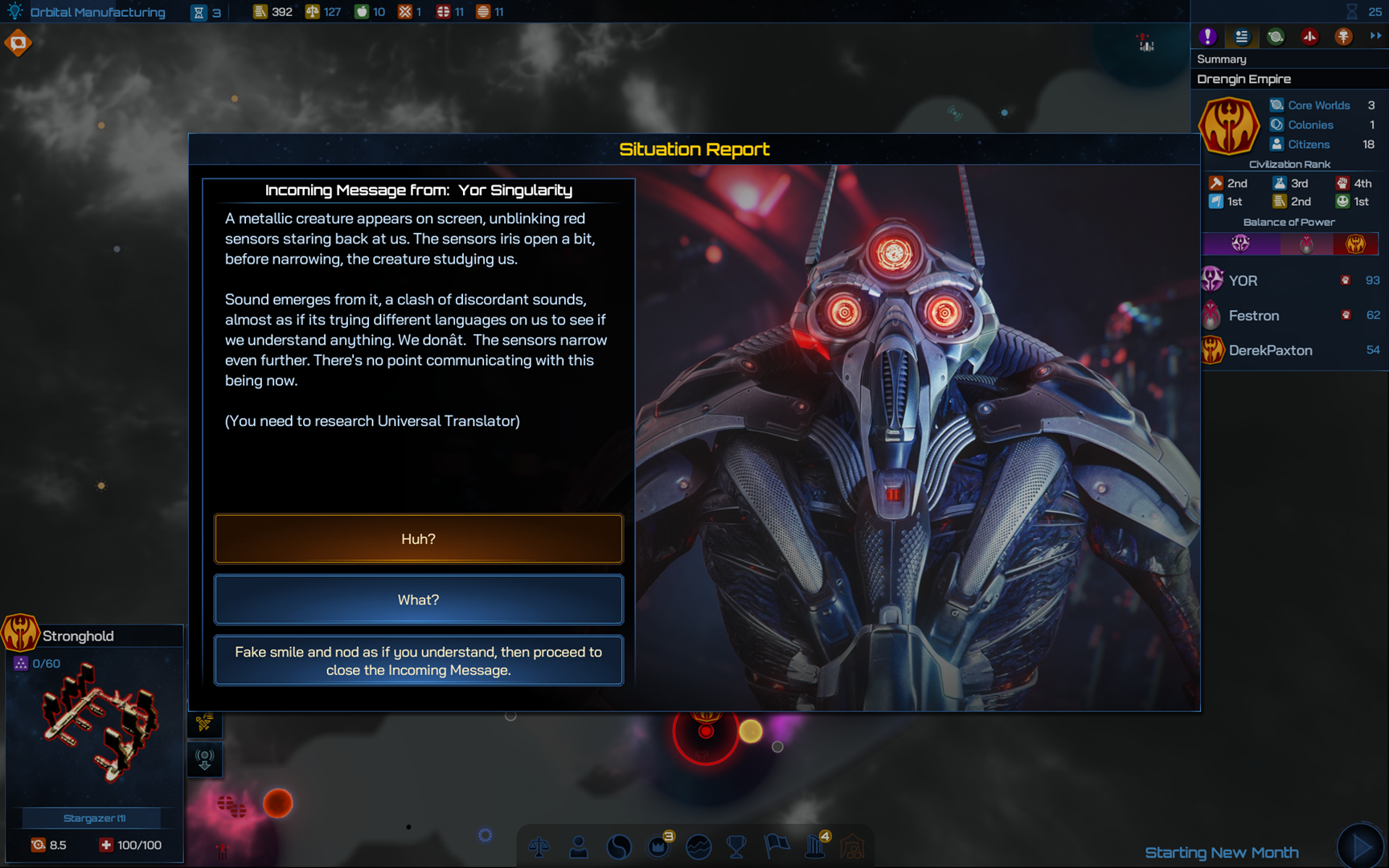 I have about 25 turns to spread out before I start to run into the AI players. I've found 2 other good core worlds and quickly got starbases in place to start mining Promethion (for research missions) and Durantium (for ship upgrades). I'm also against the edge of the sector, which is good. I was worried that I would start in the middle. This should be easier to defend.

(and I just realized there is a typo in the above entry, I'll fix that while I'm here). 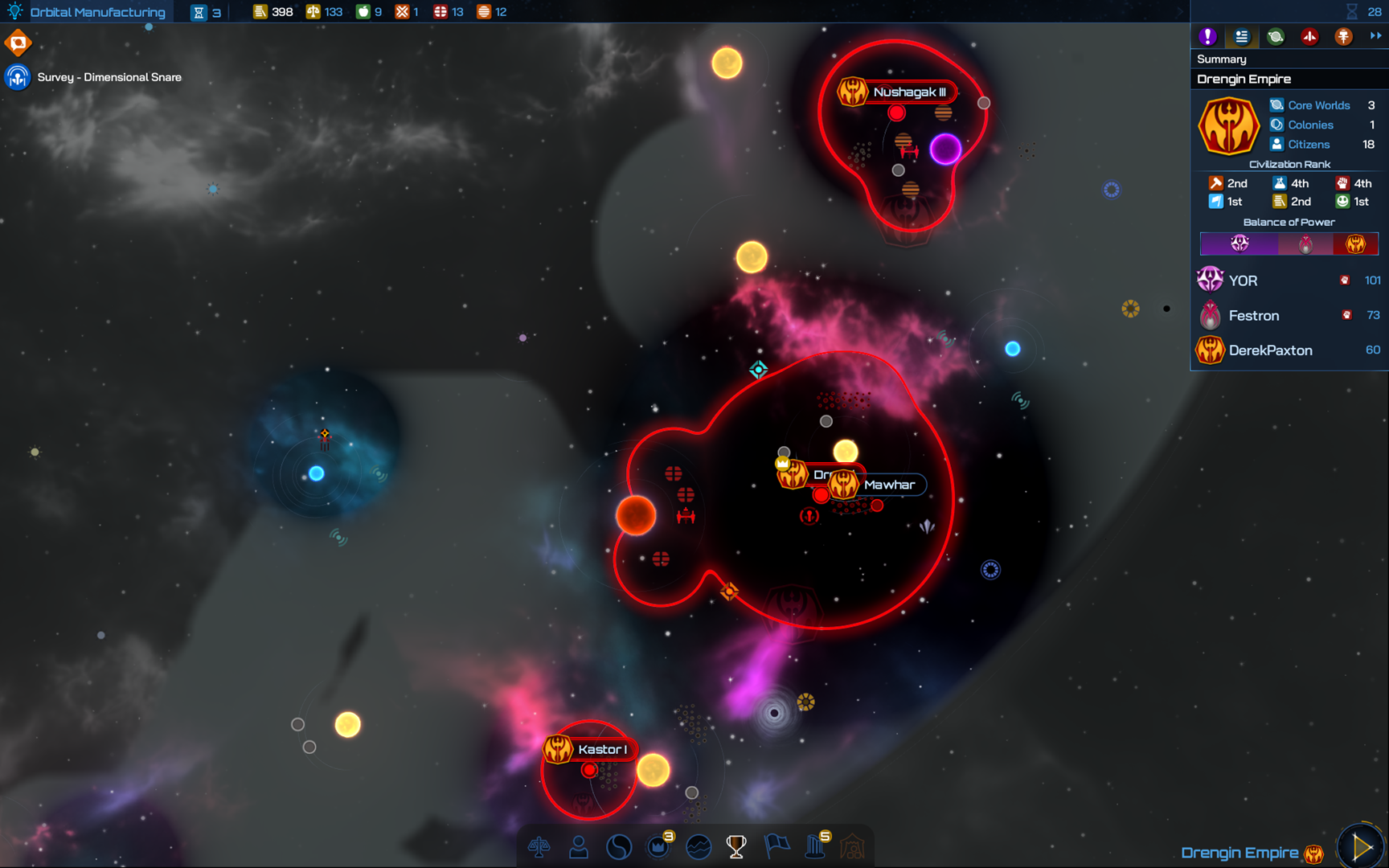 By turn 28 I feel settled. I've gotten a few economic techs and now I'm starting to make the switch to military ones. I haven't hired any commanders yet, I'm making my leaders governors instead and trying to figure out when to switch my two new core worlds from infrastructure to making shipyards. Spoiler: it should have been earlier, even a few tiny military ships could have gotten out and started picking at my enemy's colonies to slow them down instead of waiting for them to come at me.

Credits are my biggest bottleneck. I want more leaders and I want to rush production and I can barely do one or the other. (from a balance perspective this makes me wish there was a greater cost variance for bad leaders, some guys up there that are just garbage but at least they are cheap. I might have to look into that). 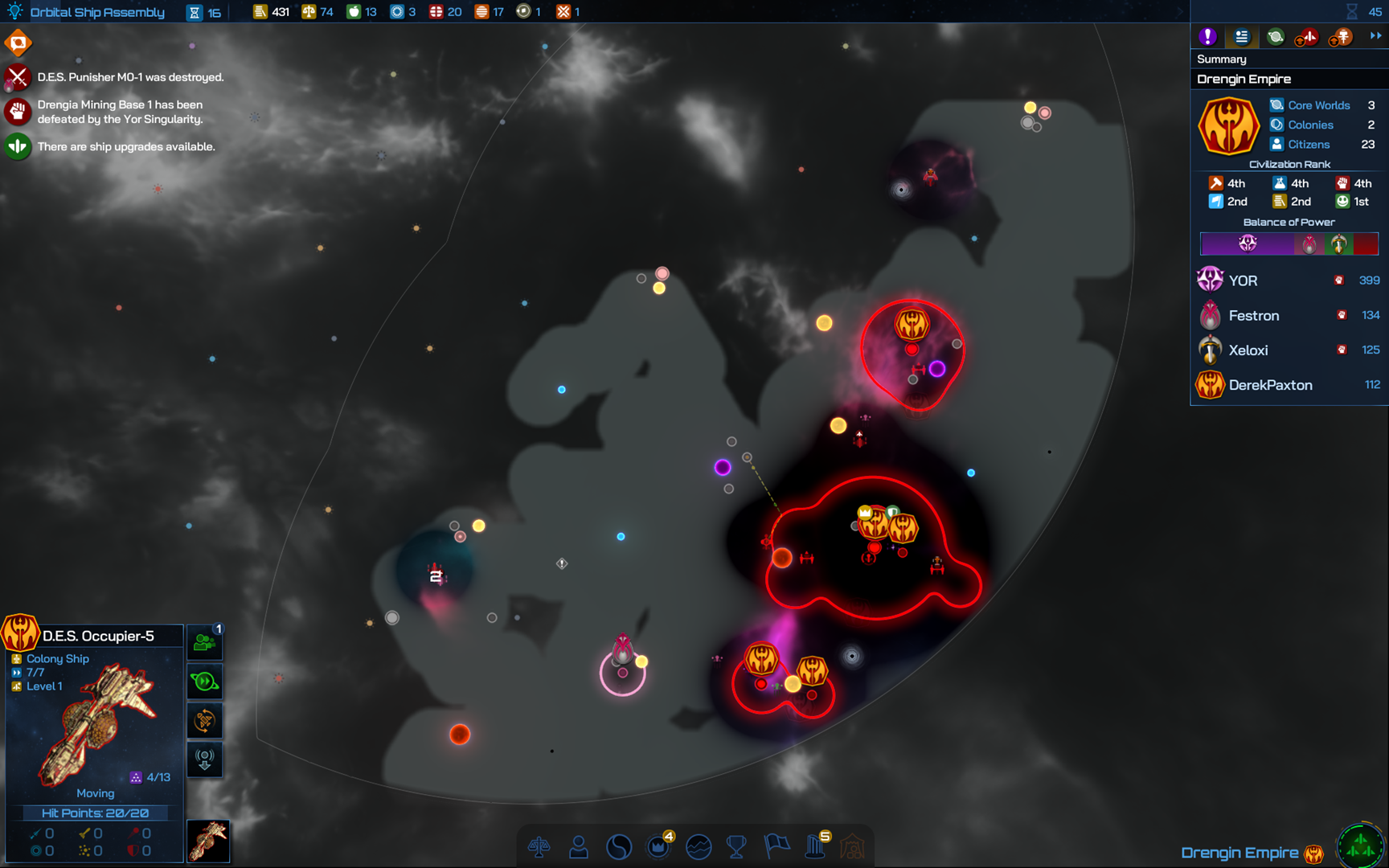 The Festron have begun picking at me, coming from the "west/left". I need commanders and fortunately, Drengin leaders have excellent Resolve so it's not hard to find good ones. But money is an issue so I issue the Print Money edict to make it happen. My people don't like it, but the alternative is becoming egg sacks for the Festron.

That's expected. But do you see that beautiful class 30 world unowned world to the far left of my empire? It's so far out, but how can I resist a planet that good, even if all the bugs are coming from that direction? I use an executive order to make a colony ship as soon as I spot it and send the colony ship out alone. We all know what happens next, the bugs grab it. But I have a command ship that can help and I swat the bug and take back my colony ship.

But, do I realize my folly at flying halfway across the sector for a new world and send my colony ship to a nearby mediocre colony world instead? No... I press on with my command ship playing escort.

Or it survives a bug attack. It even survives the second bug attack. But the third... well, it was a bad plan. 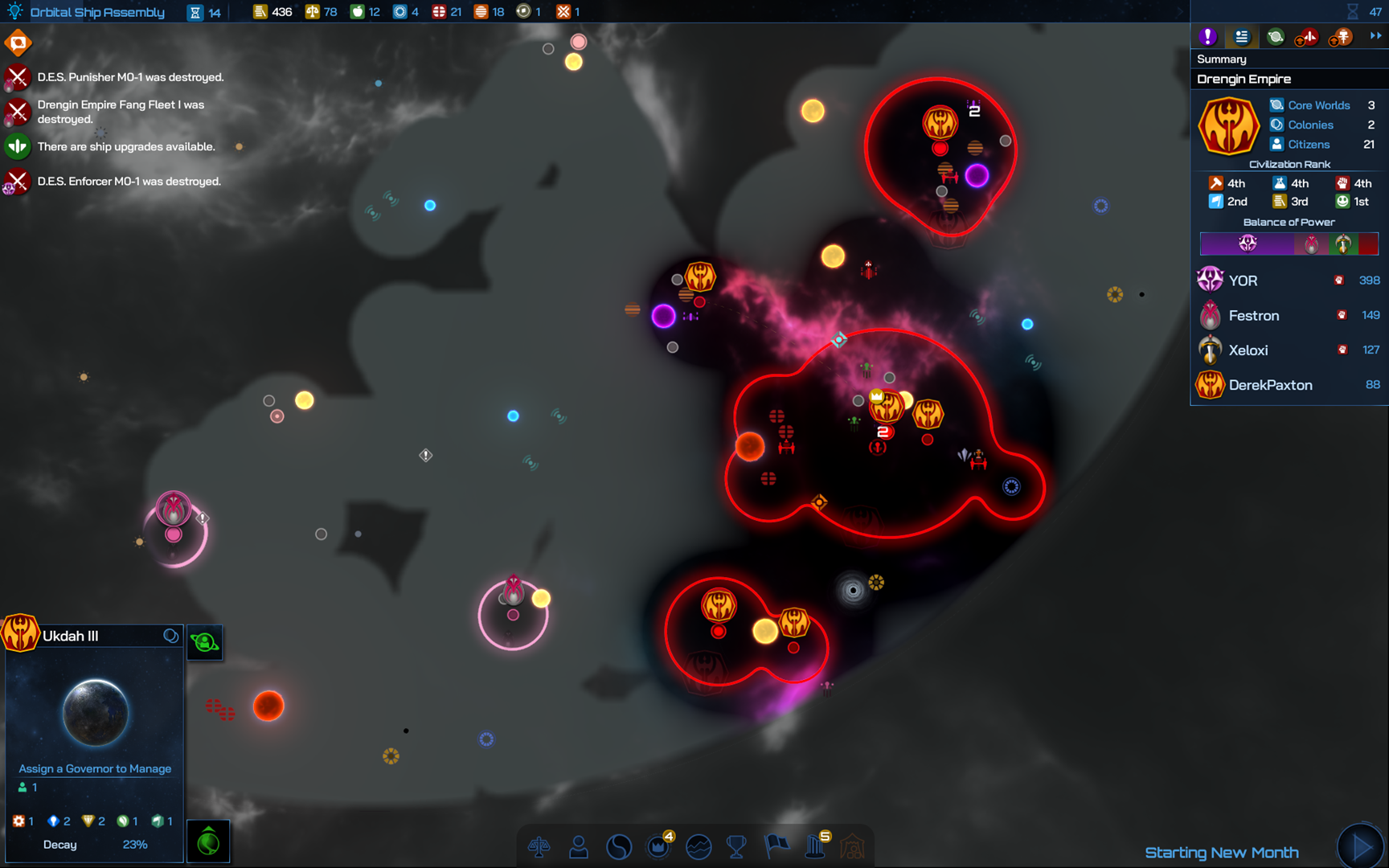 Note that my colony ship was really close to the perfect world when the Festron finally destroyed the escort and took it. So close in fact that they quickly used it to colonize the perfect world themselves. So I spent an executive order, many turns, lost a command ship and fought several battles and the end result is the Festron got a nice new beautiful world.

From here things get rough. The Festron and the Yor begin laying siege to my colonies and start flipping them. I lose three while I fight ship battles before realizing that this is a ground war. I have to retake the colonies one by one or I will fall apart. I fall back to my borders and begin to purge all my enemies and retake the worlds I've lost. After I have them I start to spread. 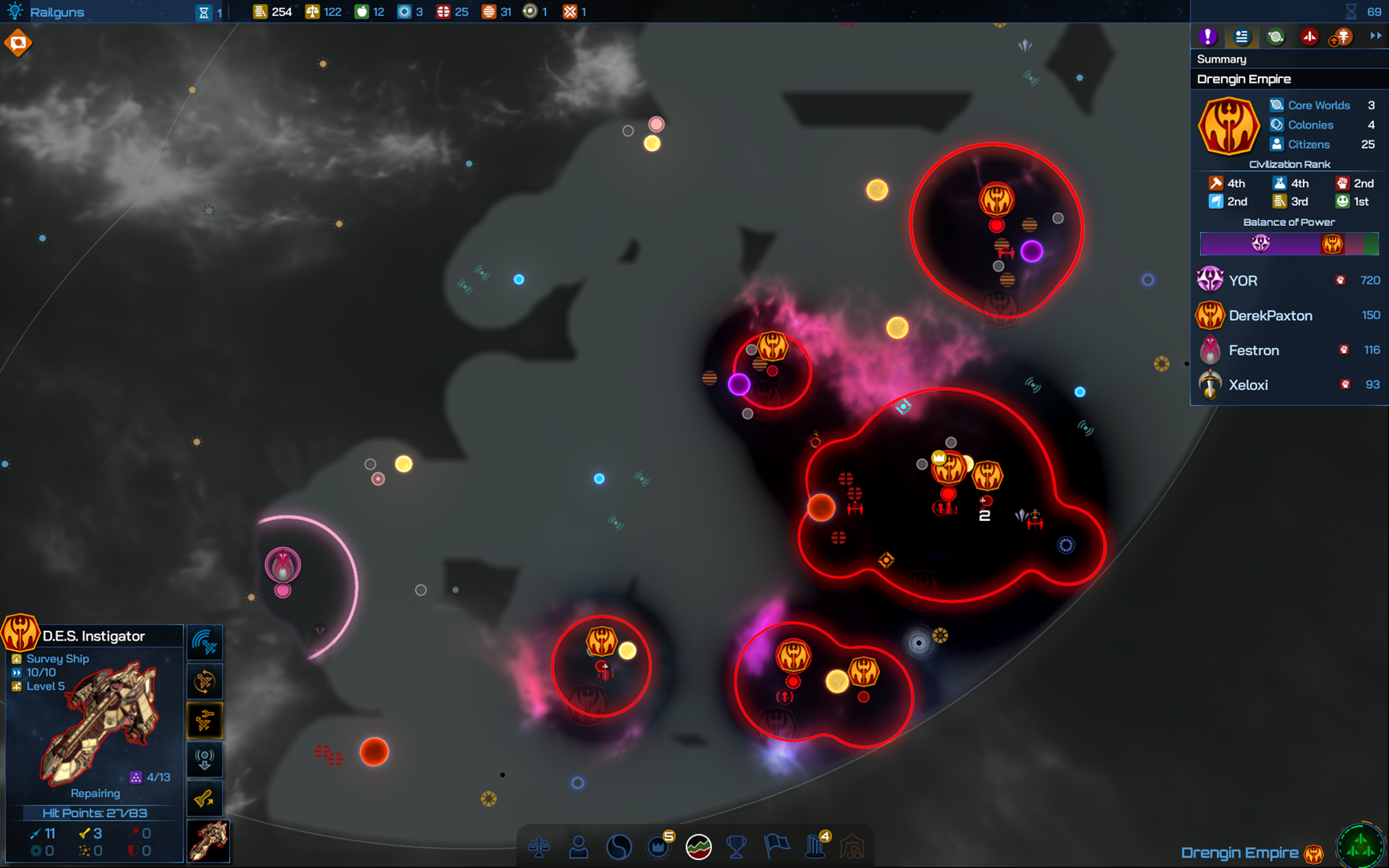 By turn 69 I have all my original worlds back and I've even taken a Festron colony to the west of my empire. I'm about to discover Railguns and every turn, and every ship movement has mattered to get me here. Artifacts I gathered early on have been helpful, especially those that repair the fleet. But unfortunately, I can't spare my survey ship to collect more, it's a war vessel now. 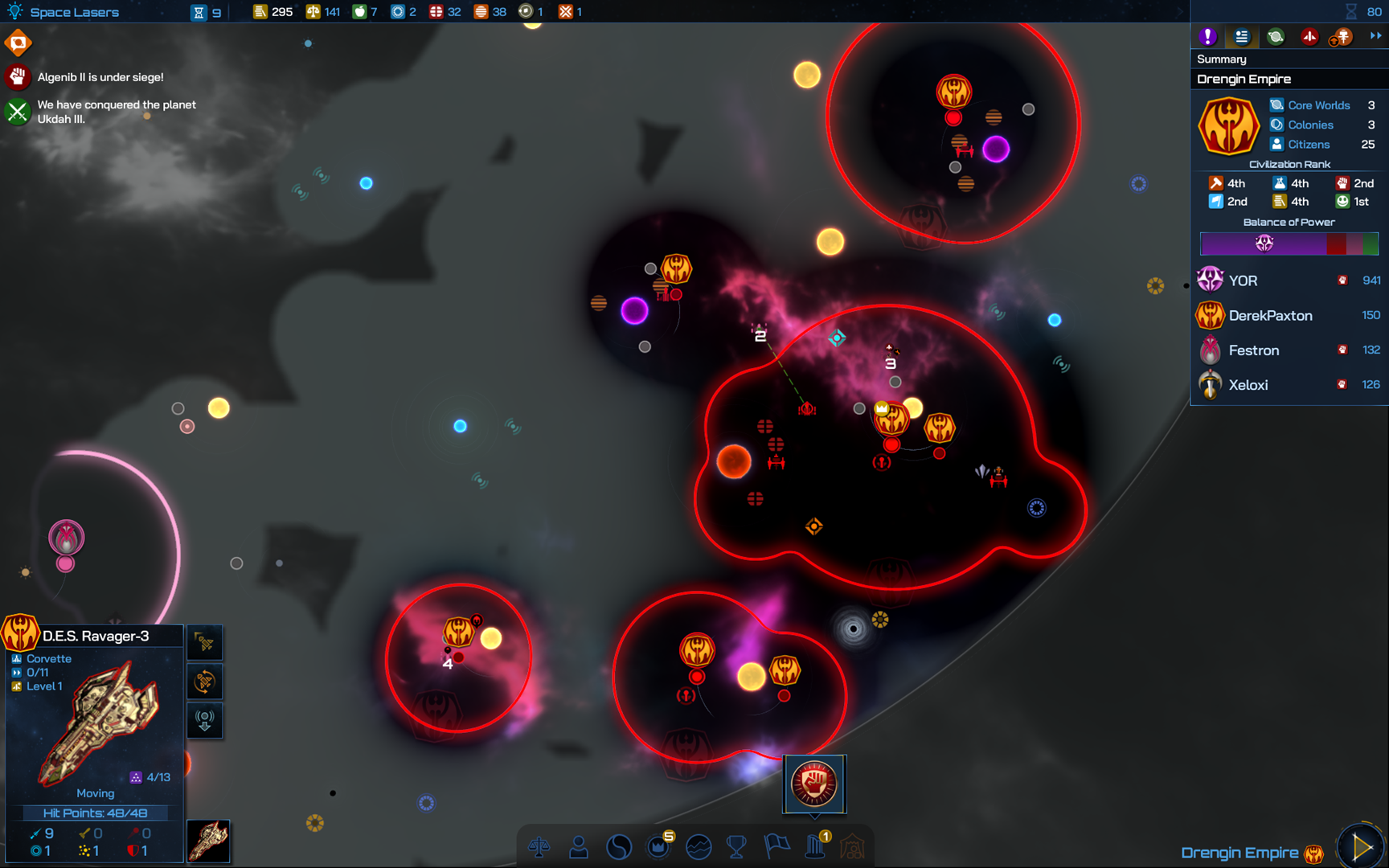 By turn 80 I'm beating larger and larger fleets. The festron have tried to send in escorted transports to capture my core worlds but I took those out quickly. The Yor are the real problem, their 941 power is more than all the other players put together. If I could just get a little time to beat the Festron and claim their resources I might have a chance to take on the Yor. This is typically where I dip into diplomacy to work out a deal. But that isn't an option in Survival mode. The Yor will kill me, how much longer can I last? 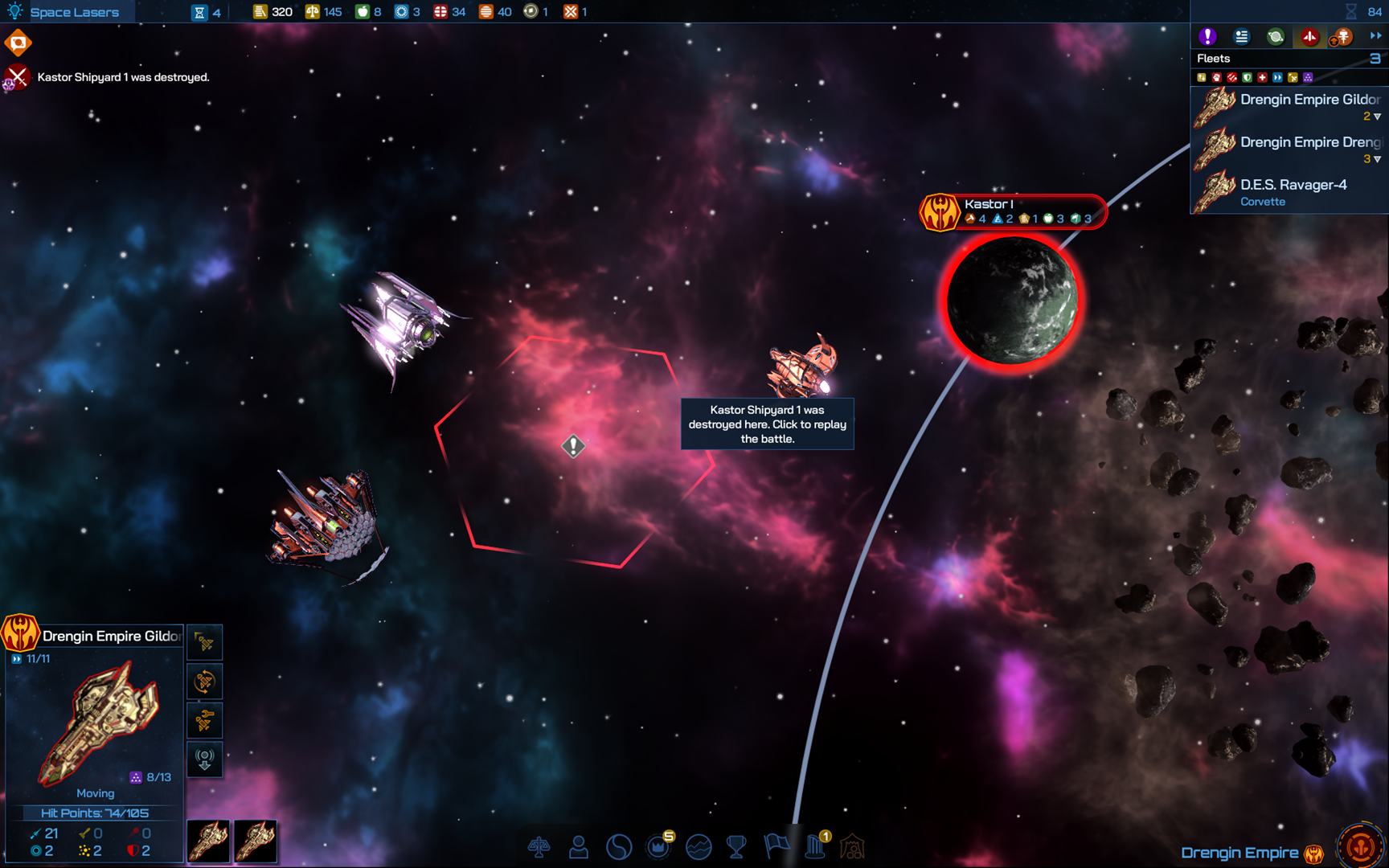 My game is in trouble. But the real nail in the coffin comes in turn 84 where the Yor, Xeloxi and Festron come together and destroy one of my two shipyards, knocking my ship production in half.

I think this game is over. I lasted 84 turns, I probably have another 20 before the AI wipes me out.

Can you last longer? This is the save for this game on turn 84: https://drive.google.com/file/d/1jYlLIg7J1czTZQR1gDDoReFXbh7PmEBh/view?usp=sharing

If you want to try it the save needs to go into your \My Games\GalCiv4\MPSaves\ directory. Then to load it you have to go into Multiplayer and select "Restore Session".

Good luck and let me know how long you last.